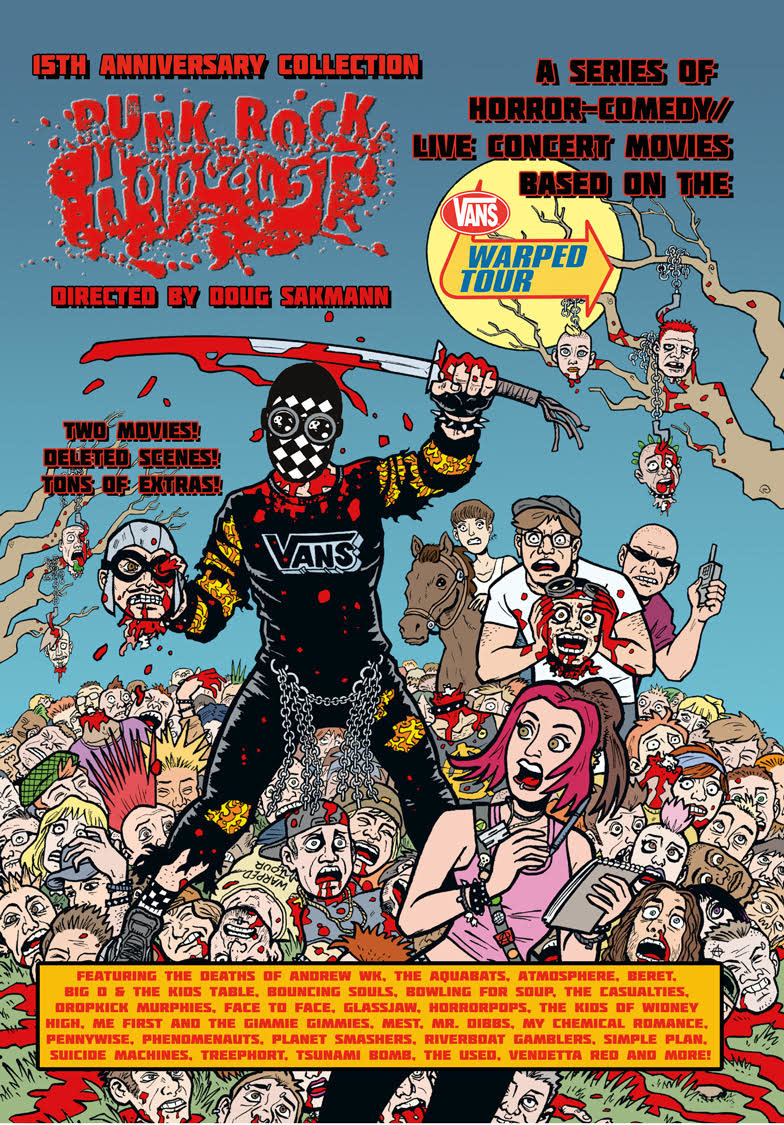 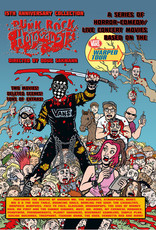 Punks Not Dead...But It's About To Be!

Punk Rock Holocaust, the live action horror comedy/concert series filmed on the 2003-2005 Vans Warped Tour is finally getting a re-release! Creep Records has released a limited edition 15 year anniversary collection of the first 2 movies along with deleted scenes and tons of cool stuff, almost 5 hours of content on one DVD!!
“ROGER CORMAN MEETS HERSCHEL GORDON LEWIS! Punk Rock Holocaust truly turns the amps up to eleven in a way that Spinal Tap would never have dared" - FILM THREAT
The Punk Rock Holocaust series follows Warped Tour founder Kevin Lyman (Played by himself) as he tries to maintain the tour amidst a string of gristly murders at the hands of a pop-punk ‘Executioner’ while keeping the evil record executive Belial (Troma Entertainment’s Lloyd Kaufman) at bay. Meanwhile, tour reporter Heather Vantress is trying to figure out who is behind the heinous crimes as the Warped Tour crew and bands (all played by themselves) are struggling to survive and stay on the road with the biggest summer tour in the US!
“Doug Sakmann’s mixture of tour commentary and George A Romero-style gore is the most original twist on the rock video genre in a long, long time.”
– Raindance Film Festival UK

The original Punk Rock Holocaust features what has been called the highest on-screen body count in slasher film history with entire crowds being massacred in addition to the deaths of over 110 band members! This collection features the first and second Punk Rock Holocaust Movies as well as deleted scenes, Music Videos & shorts from the last 15 years of Director Doug Sakmann’s career.

“Doug Sakmann’s lunatic love letter to bloodletting and mosh pitting is (a) big, brash power chord layered across the entire DIY mentality of the music and moviemaking he’s championing. And the results are amazingly insane.”
-DVDTalk.com

“Punk Rock Holocaust 2 touches parts of (the punk) aesthetic that usually are left pretty much unexplored and/or unscathed. As a result, this fabulous fright farce earns a Highly Recommended rating. Those who like it louder, faster, nastier and nuttier need apply…Thanks to the devious Doug Sakmann, all your simplistic chord progression tendencies will be sufficiently satisfied – and then some.”
Bill Gibron – DVDtalk.com

“Lots of energy, lots of music, lots of B-film blood, plenty of tongue in cheek, even some half-pipe stunts! Punk Rock Holocaust 2 is a worthy follow-up to the original, beyond a shadow of a doubt.”
BScared.com – 3.5 out of 4 Stars