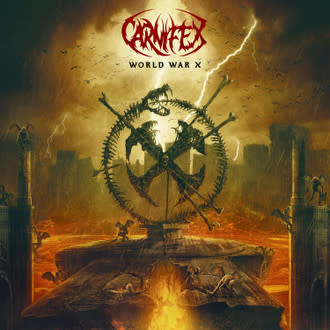 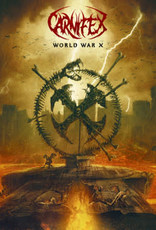 Colossal swells erupt from a vast ocean of human suffering and universal dread and in their wake present to us the latest offering from the minds of CARNIFEX: »World War X«. Soul darkening, eye-bloodying, flesh crushing death metal is to be expected from this group of musicians, yet with the new album comes a unique notion of unavoidable hopelessness; the inevitable rot of mankind. CARNIFEX has stoked the coals and breathed a distinct power into »World War X« that boils over into subjects and sounds of human degradation.

Still scorching from the release of »Slow Death« in 2016, CARNIFEX never really stopped their writing process but rather developed one element, and continued to flow into another to create a natural path between »Slow Death« and »World War X.« Although not a concept album as it would normally be defined, »World War X« is conceptually rounded in a manner which displays a distinguished theme. Through the lens of war can be viewed subjects CARNIFEX fans will be familiar with; individual struggles, and internalized challenges that can feel akin to a deadly battle.

The album artwork created by Blake Armstrong is more expansive than CARNIFEX’s usual, straightforward, symbol-centric album covers. Although a shard of iconography still rests center stage, a landscape erupts around it setting forth the final physical forms of evil onto the remaining shards of the planet. “It’s chaotic, dangerous, violent, mysterious... much like the album,” reflects frontman Scott Ian Lewis.

Nine blistering tracks are contained within »World War X« and each song is compiled of multiple menacing layers which are substantially longer than previous CARNIFEX songs. There is a noticeable gain in the complexity of song structure as they deliver you further into an audio-sensory sojourn. “To me, this album is the best we’ve done as far as both guitar riffs and solos,” says Lewis. “There’s a lot of listenability there; you hit the end and you want to hit play again. There’s more theatre, more depth to this record.” The album was once again recorded by Jason Suecof of Audiohammer Studios at the helm of tracking and mixing (DEATH ANGEL, JOB FOR A COWBOY, THE BLACK DAHLIA MURDER), and was mastered by Ted Jensen of Sterling Sound (DEFTONES, PANTERA, AS I LAY DYING).

The title track opens the album and quickly ignites the tone of »World War X« both lyrically and musically. Much like a conversation, the song displays multiple, cynical points of view on the subjects of war, death, and certain destruction. “The fallout from that,” reflects Lewis, “what happens when you find yourself in a place where the only way you can move forward is with those types of emotions, and that type of violence.” A music video for the track, shot in the barren, death filled landscape of the Salton Sea and directed by Lewis, will also be showcased alongside the single.

'No Light Shall Save Us' featuring Alissa White-Gluz will also accompany a music video (directed by Scott Hansen) upon its release. Exemplifying the album as a whole, and containing the majority of the album’s elements in one song, 'No Light Shall Save Us' was written not long after the conclusion of the »Slow Death« album cycle. “We really wanted to feature a guest female vocalist. Alissa not only has an extremely strong, recognizable voice, but a vast range of clean and melodic singing, too. It’s different for a CARNIFEX song, but it still has all the elements of our sound. It’s a great lead in for the album - fans are gonna hear a lot of things they haven’t before, but it still sounds like us. We’re trying to push ourselves within what we write, not push ourselves to go beyond our genre. I feel that at some point people feel they need to evolve beyond metal, perhaps for popularity’s sake, but I think there’s another way to do it, and that’s just to get better at what you do.” Another track entitled 'All Roads Lead To Hell' includes guest guitar solos by solo artist Angel Vivaldi.